Brand Development | Is Kim Kardashian the Greatest Selfpreneur of Our Generation? 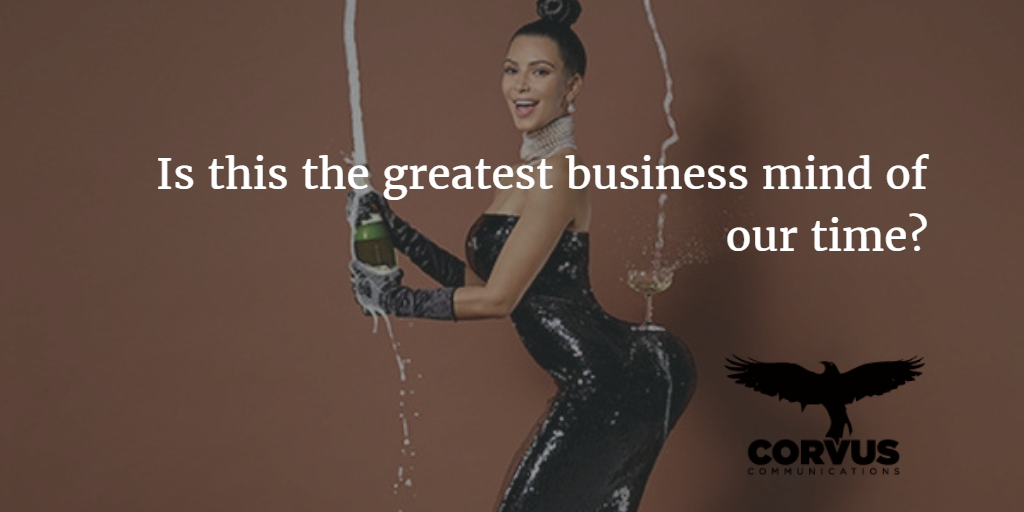 06 Apr Brand Development | Is Kim Kardashian the Greatest Selfpreneur of Our Generation?

Posted at 04:49h in Brand Development by admin
0 Likes
Share

When it comes to “self-branding”, Elon Musk and Bill Gates can kick rocks…

When you think of great innovators and entrepreneurs of our generation, most of you will think of Elon Musk, Gates, the Apple guy…Power…Money…Influence…More Money…these are the people who are writing the history books that our grandchildren will read about in business school. These are people who changed the landscape of industry, who took, and are taking, brand development to new levels. Apple isn’t just about technology, it is about a lifestyle, right?

In today’s world, however, brand development is not just about breathing a “life” into a company. Thanks to the all-access nature and direct reach of social media, brand development can be as much about a person as it is about a business…and should be, in many cases. In the words of the great poet Jay Z, “I’m not a businessman, I’m a business, man.” Jay Z, the “brand”, is much bigger than Shawn Carter the musician, writer, entrepreneur. Jay Z is a person, but is also a business.

The concept of “people as a brand” is still fairly new to the business world, and is mostly seen in music, athletics, and politics. Kanye West, Michael Jordan, Donald Trump…these are brands as much as they are people. While this concept may not be considered “real business” by some in the business world, the profits are very…very real.

When it comes to wearing the crown for being a true business innovator, for taking entrepreneurship and selfpreneurship to new levels, for redefining brand development, the winner has to be, without a doubt, the one and only Kim Kardashian.

If you are reading this with disdain and a little disgust, I get it. Most people, especially people in business, would never correlate K-Dash with business acumen. She is not the person we want in the business books of tomorrow, representing the pinnacle of brilliant business in the 21st century. But she kinda should be…

She breaks the mold in many ways, but 2 in particular that really matter:

But instead of climbing the corporate ladder, and fighting the glass ceiling, Kardashian said “Fu*k a ladder” and got in a helicopter and went to the top of a building that none of us even knew existed: a highly monetized self-brand based on fame. Not talent. Not a product. Just her “celebrity” from a grainy home-made sex tape and a reality TV show that nobody admits to watching but 11 seasons in is one of the longest running reality shows in America.

She embraces the stereotypes that people often use to (inaccurately) discredit women in business: sexuality and stupidity. And she figured out how to make millions off it.

A million a minute

So we all know her for that infamous “leaked” tape, and for that reality show. From there she has managed to leverage her “brand” to spin-off all kinds of other TV shows, clothing lines, fragrance line, workout DVDs, skincare, and apps. In 2014 she “broke the internet” by posting her semi-nude photoshoot pictures, and in 2015 she did it again by releasing her “kimoji” app to the Apple App Store. That stupid little app, that costs 2 bucks to download and features kim-specific messaging icons, was downloaded at one point at the ludicrous rate of more than 9,000 times per friggin’ second!!! Do some maths, and that works out to over a cool million per minute.

A million…U.S….dollars…per minute. For this:

Yes. Fu*k. My. Life. According to Forbes, Kim earned herself over $50 million in 2015. Not too shabby for someone who doesn’t sing, play sports, act in real movies, or invent world changing products. She has no appreciable talent, so to speak, and yet found a way to capitalize off of it. That, to me, is the sign of a true entrepreneur. Doing something never done before, doing it well, doing it despite the laughs and disrespect and naysayers. She has a rabid and dedicated fan base, she is a trend setter, she is constantly changing and influencing culture (maybe not even for the better).

Sure, there are celebrities that make more than her. And she is certainly nowhere near Bill Gates money. Her legacy might be laughed at. But damn it if she hasn’t changed the game. Brand development will never look the same again, and there are many already trying to copy her model (right down to “leaking” home videos of the adult persuasion). She didn’t need to invent something crazy, or have some God-given artistry or athletic ability. She just needed to be herself.

We should all be so lucky to find that kind of success.

CORVUS BUILDS BRANDS. PERIOD. CONTACT US TO LEARN HOW WE CAN HELP!

More from the Murder*

*don’t freak out! A group of crows is often referred to as a “murder”

Squawk at us here:

Brand Development | The Greatest Selfpreneur of All Time